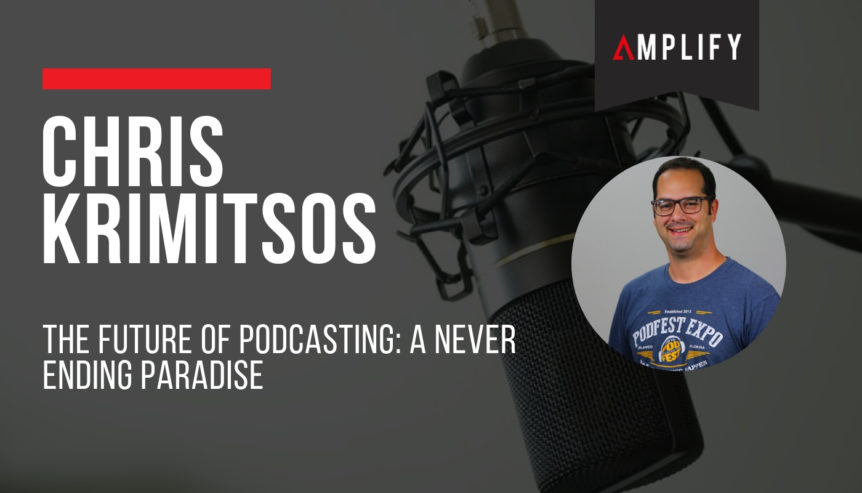 On an episode of Should I Start A Podcast, I had the chance to enter the mind of the highly productive audio entrepreneur, Chris Krimitsos. Chris is the founder of the Podfest, the Multimedia Expo and producer of The Messengers: A Podcast Documentary, as well as extensive involvement in multiple podcasts of his own.

Deflect The Onslaught of AI By Using Your Voice

The robots are coming! That’s probably the first thought most people have in mind when they hear AI is working its way into all kinds of industries. Rest assured, you’re a long way off from Sarah Connor knocking at your door and screaming that the Terminator is about to become our robotic supreme leader.

Chris assures us that although AI technology is inevitably going to progress, podcasting is one medium that is going to stand firm. This is mainly because even if Artificial Intelligence voice technology becomes superior to that of a human, they won’t be able to conduct an in-depth, intimate interview the same way a human being can.

Finding An Opportunity In Everything

Business opportunities are like buses, there's always another one just about to come around the corner, and it seems that within the podcasting and creative arena this is also true.

“Audio is exploding, it’s going to keep exploding and we’re not even close to where we’re going to be,” says Chris. This is coming from the guy who has been involved in seven successful podcasts. But he’s seeing that the business podcasting niche is starting to become competitive, so you have to find an angle that allows you to expand your outreach.

“We’re going to see an integrated approach grow over the next couple of years, and it’s all going to fuse together,” so you need to be deciding what resources you’re going to use.

Chris explains that he attended VidCon, the multi-genre online video conference. His booth was right next to Facebook Watch’s, they had a YouTube guest in their midst. The famous pug called, Dug the Pug. Chris quickly became acquainted with both the little pup, plus a platform called InstaPets, and the concept of pet live streaming.

This is where his business mind kicked in. Okay, so you don’t want to show your face on video, but you might have a pet. “Put your pet on Instagram or YouTube. Some of these pets are making seven figures sums in a year.”

His pet Sammy, the parrot has become a YouTube star in her own right. Just three short video posts in and she already has 200,000 views and 545 subscribers on the latest count.

“Driverless cars are going to be online in two to three years. That means when you’re in the car you don’t have to be driving, so you’re going to be able to absorb video, audio, pretty much everything,” which subsequently means that consumption of podcasts is venturing into new avenues.

Voice activated tools such as Amazon’s Alexa and Google Mini make it easier to consume audio too, so as the technology improves having some kind of knowledge surrounding voice activated searching will be a huge benefit.

There is a new technological wave coming that needs to be caught by podcasters and creatives alike.  “The consumption is only going to get more intense.”

So, with this in mind the likelihood of how and when we consume audio is going to evolve dramatically. It is down to the individual as an entrepreneur to stay abreast of these changes.

Listen to the entire podcast episode of Chris Krimitsos here.

166. Chris Krimitsos on the Business Benefits of Podcasting and How To Grow In The Modern Era of Audio