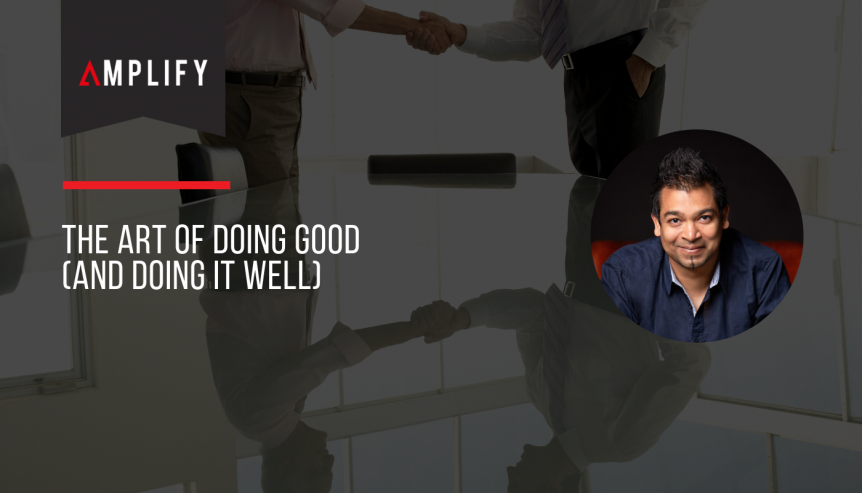 If you’re reading this article, you probably know Ronsley Vaz. As Chief Daydreamer at Amplify and host of Bond Appetit and Should I Start a Podcast, chances are his influence has reached you if you’re on this page. But you might not know his story.

Several years ago, Ronsley found himself more than $400,000 in debt after a failed attempt at running his own restaurant. He felt worthless and dejected — not just because of the massive hole in his wallet, but because he felt like he couldn’t offer anything to the world, that he was a failure of the worst kind.

This catastrophe was nothing short of an education, however. Ronsley began grinding away, using his desperate condition as fuel, and within a few years he was running a seven-figure business.

That may sound like an incredible achievement, but it’s not what makes Ronsley proud. One of the most important goals, he often mentions, is that there is a sense of altruism that comes from his work. This is something that all of us as humans are motivated by: even the most cynical people feel good when they help others.

How can we apply this to our own lives and careers?

First, don’t wait until you’ve achieved some arbitrary level of success to start giving back. Even when you’re in debt, or when you’re struggling to find enough time for yourself and your family, there is something you can do to help a cause. Maybe you can take your family for a trip together to volunteer somewhere. Or if you’re time and money-starved, a random act of kindness might be all you can spare.

The point is to cultivate a sense of well-being through helping others. That is the ultimate goal, and the best way to motivate yourself when you don’t want to get out of bed in the morning.

Ronsley has a story he sometimes tells about the time he gave a Tedx talk to a room full of people. Before the speech, he was beside himself with nervousness. He couldn’t possibly imagine himself, even someone who has to operate on a daily basis as an extrovert, getting up and baring his soul in front of a crowd.

He spoke to a friend who asked how he was preparing for the speech, and he told her that he wasn’t sure if he could do it. “Ronsley,” she said, “It’s not about you.”

This simple sentence lifted a weight off of Ronsley’s shoulders, but it’s not just useful for public speaking.

Realising that what we do is for other people, or for a greater good, is one of the most freeing thoughts we can have. Because even if we can’t do much, we are helping in some way.