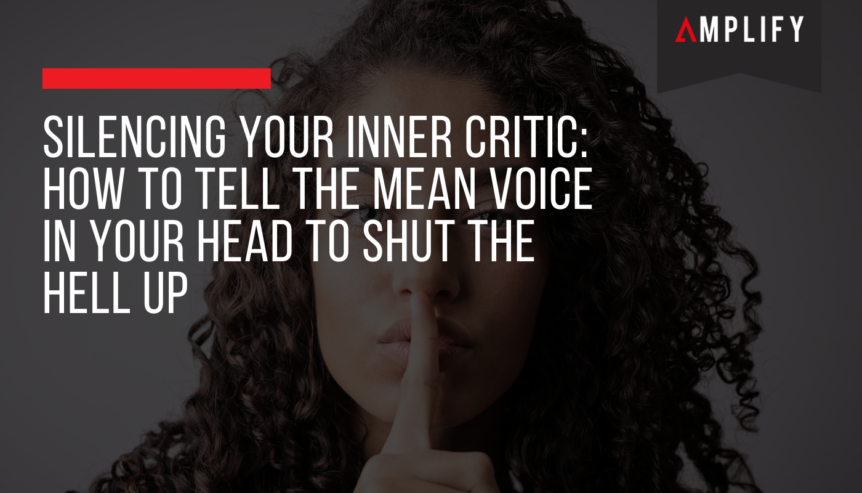 Have you ever tried something new or put yourself out there professionally or personally only to have a little voice inside your head tell you not to bother? That you’re not good enough, not brave enough and to just give up?  If so, you’re not alone.

On a recent volume of Psychology of Entrepreneurship, I had a candid discussion with Melissa Ambrosini, speaker, entrepreneur and best selling author of the book Mastering Your Mean Girl. Melissa has spent many years learning how to silence her inner critic. In fact, she’s built a career around teaching others to do the same.

The most significant contributor to Imposter Syndrome, that feeling of not being good enough to accomplish our goals, is our inner critic. An article in Psychology Today that caught my eye states that every person is divided into two sides; the goal-directed and the self-critical. The self-critical side is home of the “critical inner voice”. This is what Melissa refers to as her “inner mean girl.”

This inner critic’s voice could be formed by past painful experiences in childhood which we either experienced or witnessed. As we grow up, we unconsciously integrate this voice into our thought patterns. The longer we let in be a part of ourselves, without making a conscious effort to address it, the more it can affect our decision-making process, and thus our lives.

Ok, that was heavy.

The good news is that Melissa is an expert at handling heavy intense concepts with a light-hearted attitude that makes it much more digestible and takes out much of the doom and gloom. Her TEDx Talk brilliantly did just that. In that talk, Melissa explains her C.A.S.T. system for dealing with the inner critic. 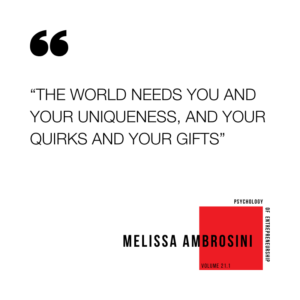 The first step to Melissa’s process is to create a character for your inner voice. “That voice is there because it thinks it’s helping you. It’s not. Your job is to be discerning between its characters,” she explains.

So how do you create a character for your inner critic? I start by giving mine a name. “Ridonkulous Ronsley” is my inner critic, and it’s perfectly fitting for me. But, hey, whatever works for you. Grouchy Gertrude, Annoying Amy, Creepy Charlie… Bob. The point is to give it a name. This allows you to identify it and differentiate it from any other inner voices you may have.

The second step is to become aware of your inner critic. Start to recognize it’s voice when it begins speaking. A great way to do this is to write it down. Is Creepy Charlie telling you that it’s not even worth it to go to those night classes? Or is he telling you that you look stupid in those new pants? Write it down. When you have a record of what your inner critic is saying, you can start to recognize patterns. Once you can recognize the patterns, you can start to shut down those thoughts before they even start.

Once you’ve become aware of that voice and given it a name, you now have the power to shut it down. When you recognize those familiar feelings beginning to surface, and hear Annoying Amy knocking on that door, open it politely, tell her “No thanks, sister. I don’t have time for your bullshit today.” Then shut the door and go about your day. Melissa says it’s helpful to picture your inner critic as “an annoying salesperson selling something you’re not interested in”.

Think about that. Because for me, it’s one of the most powerful things she said in our entire conversation. Your inner critic wants to keep you in your comfort zone. Stick to what you know, don’t colour outside the lines. Please stick to the rivers and the lakes that you’re used to. Ok, maybe that last one was TLC, but you get the point.

I’m here to tell you that you can go chasing waterfalls! But in order to do that, you have to tell your inner critic to shut the hell up. Once you do, you can start living an authentic, purposeful life. Melissa put it best- “I feel truly proud that I’ve been able to move through what I’ve been able to move through. I feel truly proud that I have reprogrammed so much. Because I wouldn’t have what I have if I didn’t. I feel proud of myself for continuously doing the work and showing up.”

So show up. Tell your inner critic to shut up.

Sure, it’ll probably come back. It’ll probably keep saying stupid shit. But it’s your responsibility to keep shutting that door. Eventually, the knocking will come less and less. But when it does come, you’ll be more equipped to tell it to sod off. 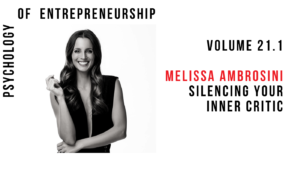 For more insight into how to silence your inner critic check out volume 21.1 of the Psychology of Entrepreneurship podcast hosted by Ronsley Vaz and with special guest Melissa Ambrosini.