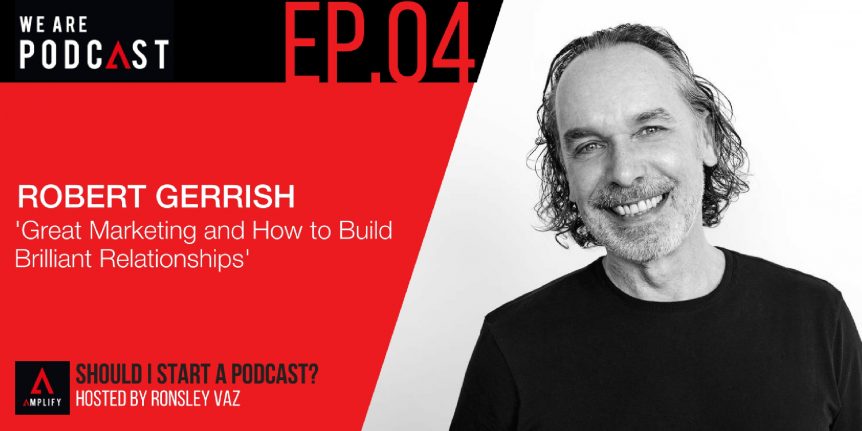 Robert Gerrish has done a lot for the entrepreneurs of Australia. Soon after Saatchi & Saatchi bought his independent marketing agency in 1989, Robert ran off to do his own thing. Focusing primarily on youth brands, Robert made a couple of sideline forays into the world of art and music before moving from London to Sydney. He finally succumbed to soloism with the launch of Flying Solo, Australia’s solo and micro business community.

Since 2005 he has co-authored the business bestseller, Flying Solo: How to go it alone in business, he has written pieces for a variety of media and has been a business commentator on ABC 4 Corners, A Current Affair, Sky Business, Fairfax, CBS, 2UE and ABC Radio. He is the host of the Flying Solo Podcast & Small Business lifestyle Podcast.

“One of them is definitely is on that thing of really thinking more about preparing more for each guests I guess. For the early podcasting I did, I just would likely sort of busked. They kind of appear on the cool and I would ready and off we go and then I get to the end. Any of those I don’t know. So I’ve realized that it’s important to put in preparation and for me anyway, more than I think. Now, the people are need at least a month of preparation. All the people is the most proficient of talking. You know I know Andre Griffiths I could ring him up two minutes after we finish and Andrew put down that cheese sandwich and just record a podcast and he would be ready to go. You know he would just be ready to go. He’s that kind of guy and some people like that. That’s the kind of the really easy way to podcasting. Just to find people like Andrew. “

“The problem with that is you’ll find that those people are often popping up in a loss of places. So, if you want to have a podcast that has kind of original guests and that’s would I like to try though, then that means I just going to research a bit more. So that thing, is plan a bit more and think about what it is that I want to be saying. And getting used to being a better list now I think is really important.”

The good thing to do anyone who is  thinking about doing podcast is just sit down of your smart phone of choice and just interview anybody, interview your children, your grandmother, your aunt. You know, just get some runs on the board and not just anyone who listens to them just for you to listen to.

For a starter podcaster, you kind a really do that. You kind a need to do that. You kind a sit with the squirm. You know listen to it. Maybe sit down with someone who you really respect and listen to them as well and just work out where you could be stronger and often I believe that my owns review of myself is my preparation and my ability to learn. So that’s a couple of things”

“I do think is a little bit of let down with some podcast programs and I think I might being guilty in the couple of my early ones but hopefully they are ok, is that the sound quality. “

“Getting a decent microphone, making sure that your office is resemble to the sound friendly. So getting the sound right I think is something definitely. I think the whole branding and positioning also is very important to figure. There’s no doubt that there are more outlanders on the round now than there were more last week and then there will be more next week. Same with podcast, there’s a lot coming so I think plan way you want to be and in terms of the market, you want to take and just grab that space and grab it firmly by the throat. Too often same with any kind of small business marketing is people too concerned about being narrow. They think they’re going to loss opportunity and so they go broad where I think in podcasting be narrow. Get clear on who you really want to talk to and don’t be scared about being narrow. Be as narrow as you like because often I think will just force you to have better content and will give you extraordinary. It mean the people will talk you more because your podcast is so focused.”

Which podcast should I follow, why and how often?

“I’d listened to a few. I’d listen to Richard Fidler on ABC. I listen to him because I love his style. He makes me listen to things because I know he’s so good. I also listen to the “Ted radio”. I love the way that they put a lot of production where basically they put a theme that ted talk has been down to particular topic might be aging or something and maybe three or four past speakers and who spoken about on something to do with aging molded together into one hour podcast. So cleverly done. Beautiful recording. Another one which I really enjoy is “the Moth” podcast. It’s a true story telling podcast from the US. Basically this is a story of proficient people telling stories. The recording quality sounds like a town hole. But it’s really good. You hear people saying really musing stories. So I love that because it gives me such an insight into how to tell a story. So I really enjoyed that. Sometimes I listen to James Altucher show but he noise me so much. There’s no denying the guy is very successful. I also listen to Ricky Gervais. Seth Godin I listen to.”

Where to find Robert Gerrish