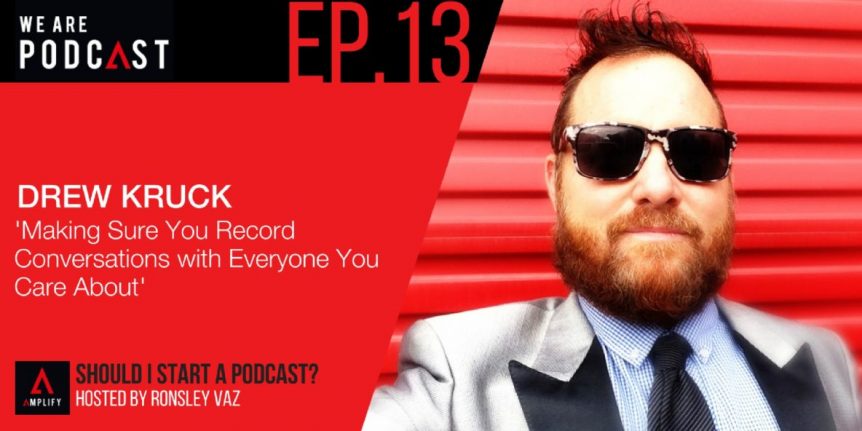 Drew worked in and out of Titan Sheds for the last 25 years and recently created Titan Lite Shed Parts within the Titan Group Of Companies which is a large success for Titan's 100,000 strong customer base.

Drew realised he knew alot of people and felt like he could talk to anyone about anything. So he started a podcast show and advertised it all over the world; Gold Coast vs Drew Kruck. “Everyone Good, who were once bad, tell a great story”

When someone is considering a podcast as a medium, how do I know if it's for me? How complicated is it to do a podcast?

“Through meeting Steve Dart from Pulse X and it was just through that experienced. Choosing to meet on podcast, talking to positive people and some of my friend is like “I don’t think you’re ready to speak on the show.” And now I’m podcasting on his show and producing that show and we speak entrepreneurs every day. I don’t know where it end up but I know this is the start. Podcasting is the greatest thing that happened to me recently that started the next level of my personal life.
I’m on episode 64 in my own show now and I have reconnected. Just by one hour without checking out Facebook on my iPhone. That all it takes to completely reconnect with people and form massive networking. It was on February 10 that I went “I’m scared but I’m going to start a podcast and I really like it. ”

Which podcast should I follow, why and how often?

“Like I said The Joe Rogan experience. Another comedian Bill Burr. He has a money morning podcast and He's just sort of an angry guy. He's kind a like my dad. He doesn't have guests. He’s quite popular. I guess I always kind listen to a few and got ride into Dave Jackson. The school of podcasting. I'm always playing that on Sunday nights while I barbecue some ribs or something. I find that sort of neutralizes me if I listen to podcasters, you know tips of podcasting.
It’s funny how you get to know someone's voice then after a while you don't judge them at all. They just a part of your mind and now here you is being a great interviewer. I'll go for blast of some comedy. The legion of skanks. He's the reason I know to these particular comedy podcast, is kind of what I actually want to happen in a Gold coast. ”

Where to find Drew Kruck