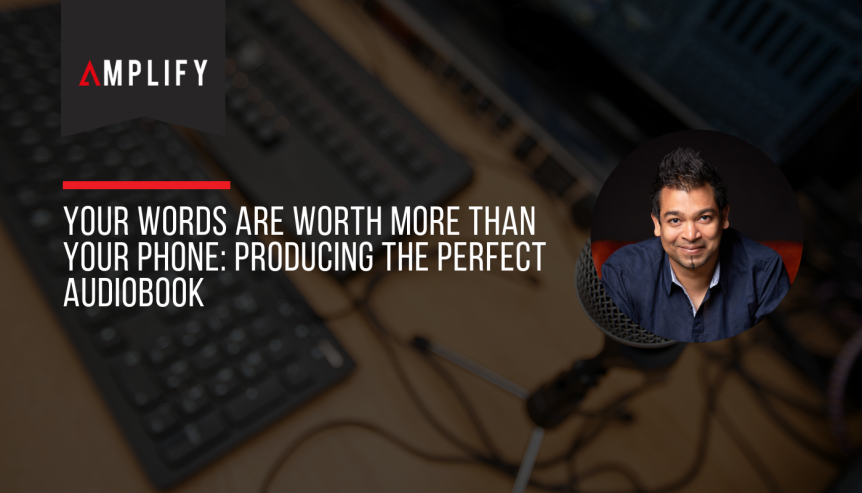 You’ve just spent X amount of time hunched over a computer writing your book. Typing endless sentences that at some points you didn’t feel like writing. You block out the painful memories of deleting entire paragraphs, or even chapters for some. Then there’s the feedback from the editor that just makes you want to throw the book back at them with your remaining dregs of will-power. Fast forward and you are now the proud author of your book. It can’t get much better than this. Or can it?

With audiobook production still making waves in multiple industries, it will become canon soon for authors to have their book in audio form. In fact, people are becoming increasingly frustrated when a book they want to read isn’t available for listening. This is due to convenience and better retention. With more and more people forever on the move, audiobooks are the obvious choice for people to enjoy books.

However, it seems there is a general consensus that converting into an audiobook is laborious, just a chore rather than an opportunity to leverage existing high-quality content to pique the interest of prospective clients. This is where authors must begin to realise the end of your writing journey isn’t when you have a book in your hands, but rather in your ears.

I have never seen more corners cut than in self-produced audiobook recordings done on their iPhone (of all things). What I have to say is this: put the phone down, your words are worth more than that. Having been an audiobook listener first before entering the production industry, I know what it is that makes consumers not want to listen to your book. Half the challenge is having interesting enough content for people to be engaged for the eight hours that audiobooks run for on average. You’ve already committed the hard yards, and that is why there is a book with your name on it in your bookshelf. The other half of the challenge is converting it to an audio quality that won't deter or annoy the listeners.

Clients come to us all the time claiming, ‘they have an audiobook recorded and ready to go’. Initially, my naivety got the better of me, and I quickly began preparing for a tsunami of clients to upload to Audible, making epic bank along the way. However, what I found was this: The recordings were often done on a low-quality microphone. There are frequently noises in the background, and the reader doesn’t know how to read aloud to engage with an audience.

What you want is a recording that has no background noise, one that keeps the listener glued to your voice and not the mower chomping away in the background. Listeners want the book ‘explained’ to them, not simply regurgitated which straight reading-allowed only offers. And, as much as people won't like to admit it, your voice can always sound better, something that only a professional audio engineer can achieve. These are all things you will not be able to learn on your own.

Amplify’s The Library of Sound, for example, tailors an experience that bests suits the author. It is statistically proven that if the author of a non-fiction work reads their book, it is received much better than a book read by a narrator. We want our authors to enjoy the experience of recording their audiobook. You’re a published author for crying out loud! You’ve achieved something not a lot of people have. Sure, the process takes time, and at times can have its frustrations. But recording it unprofessionally also takes time and has its frustrations too. Why not have the aid of a team that understands the process. One that can best help you get through the difficult parts and make the process as enjoyable as possible for you?

Let’s go back to the perspective of the listener. If you had a choice to listen to eight hours of audio, would you rather the listener of your book purchase a lower-quality recording. Which will subconsciously influence their perspective of you in turn. Or, you can give them a crisp, clear recording that’s worth slightly more on the market. This will also influence a listener's perspective of you, but this time in a much more positive way.

I’m friends with a lot of people whose jobs are recording sound in films, television shows and web-series. All of them say the same thing: ‘Good audio is often ignored. But bad audio is crucified’ – the life of a soundie sounds pretty rough after hearing that. Yet, it still holds true. Good audio is expected. So to recap, when a listener doesn't receive that, it will influence their perspective of you.

Experience is Hard to Forget

According to a study by Ruby Newell-Legner called ‘Understanding Customers’, it takes ‘12 positive experiences to make up for one unresolved negative experience.’ That’s a lot of people to please. And that’s going to be hard if your fridge is humming in the background the entire time. The article continues by stating, ‘News of bad customer service reaches more than twice as many ears as praise for a good service experience.’ I am guilty of this myself. More often than not, I’ve told friends and colleagues about a terribly recorded and produced audiobook rather than a good one. Why? As I mentioned before – good audio is expected.

So, before you begrudgingly toss your book onto your dining table and open up your voice memo recorder on your phone, consider this: You’ve just spent X amount of time crafting your words into a book, that not only reflects the line of work you're in, but who you are and why you do the things you do. Do you really want to do that justice by recording something that has your neighbours yelling or a dog barking in the background?

Record something that reaches new demographics. Record something that will motivate and inspire people. Wether on their way to and from work, or whatever they might be doing. Make your book a memorable experience on paper and in people’s ears. That’s what we aim to do at Amplify, and we can help make that a reality for you too.