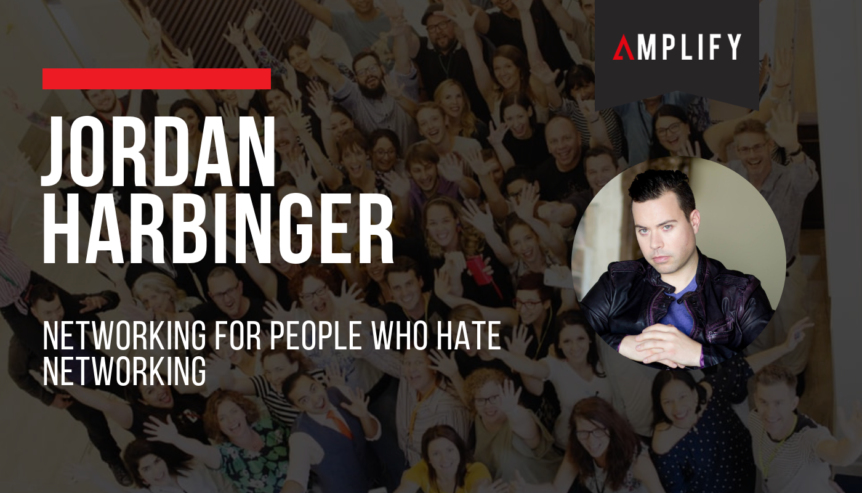 Most well-adjusted people hate networking. We hate starting inane conversation in order to give someone a business card that they will inevitably chuck in the trash. We hate going to conferences and awkwardly crowding around circular coffee tables and pretend that we’re interested in other people.

Here’s the bad news: whether you hate it or not, networking is totally necessary.

Here’s the good news: it doesn’t have to be excruciating.

Jordan Harbinger is host of the Art of Charm podcast, a top iTunes podcast that seen guests like Tony Hawk, Shaquille O'Neal and Neil deGrasse Tyson. Every week, he delves into the psychology behind persuasion and gives listeners useful tips for winning friends and influencing people (without being a manipulative social climber).

At We Are Podcast 2017, Jordan explained that networking, which most people claim they hate, is something you can, and should, turn into a competitive advantage. The fact that most people do hate networking is your golden ticket. Because nobody else is really putting effort into it — face it, most of us show up, hand out business cards and go home with a fleeting sense of accomplishment — you have the opportunity to really excel at it.

So how does one do that? How does one actually do well at something as painful as networking?

Let’s say you’re an introvert. This is actually one of the most common excuses people make for not networking, but it’s actually a good thing. Introverts are great listeners and are usually better at dealing with people than they give themselves credit for. Because they’re not trying to be the center of attention, they tend to be viewed as more authentic than extroverts (sorry, party people).

Jordan has a concept called ABG — it stands for “always be generous”, or “always be giving”. The gist is exactly that: you should always be doing things for other people without expecting anything in return. This last part is where most people screw up. They do a small favour for somebody and then wait impatiently for the other person to reciprocate. If you have this attitude that you deserve something once you’ve helped another person, you’re going to be disappointed and, frankly, not very well-liked by other people.

Use every opportunity as your disposal to network. Go to conferences, even if you hate conferences, and make genuine conversation with people around you. Do them professional favours and don’t ask for something in return.

Eventually, your network will grow and you will have a great group of people, even if they’re not all close friends, who would be happy to help you out in your time of need.

Listen to the entire podcast episode with Jordan Harbinger here.

If you want to be proud of the voice you’re sending out into the stratosphere, download the comprehensive 81 Point Checklist here and get ready to launch your audio marketing machine.