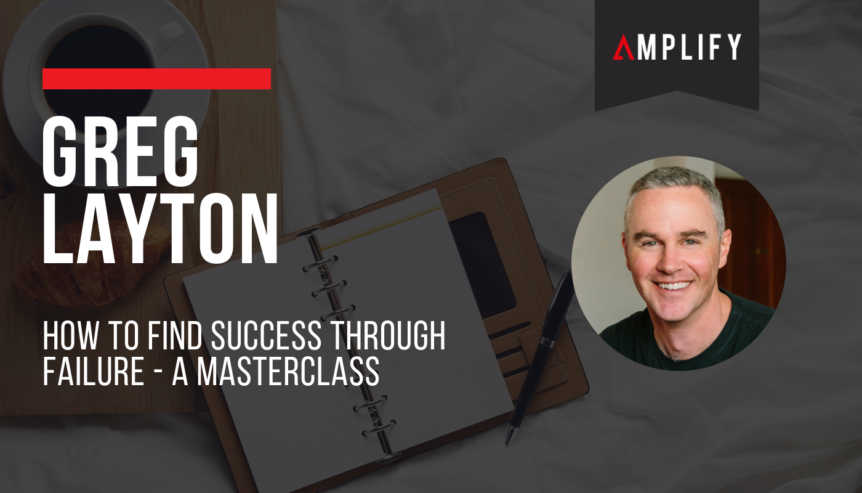 Potential failure is an ever-present shadow that follows many entrepreneurs.  Greg Layton from The Inner Chief podcast, recently interviewed Amplify’s very own, Ronsley Vaz.  The conversation took a deep dive into identifying common failures within business and certain simple measures you can take to avoid big mistakes.

Get Rid Of The Labels We Give Ourselves

If you had to really think about it what label would you put on yourself? Engineer? Designer?  Creative? Parent? In the eyes of Ronsley, labelling oneself can lead to stifling your potential and boxing yourself into a career corner.

In the beginning, Ronsley had it all figured out. Friends and family had told him he was technically minded, a prime candidate for becoming an engineer. “I was not born an entrepreneur, I just kind of thought I was a nine to fiver,” he reminisces, “Those were the narratives that were given to me.” Today, everything about his essence is tilted more towards being a creative type, a far cry from the office job he was preordained to have.

“I believe that’s probably one of the biggest things that limits what each one of us can achieve, is because somehow either through circumstance or in our own heads we’ve put ourselves in a certain box. We’re just not willing to explore anything passed that box.”

Labels can almost become the rules of our existence, so by removing the limits of self-containment, you suddenly open up doors and lose that fear of being out of control the more receptive you are to fluidity. There are limitless possibilities and successes to be had – you just have to be willing to explore them.

Keep Energy Levels Up As A Leader

There are many things that contribute to a productive working atmosphere, but energy heads the top of the list. When levels are low, that’s when Ronsley feels he’s getting it wrong as a leader.  “When I say I’m the CEO of Amplify, it’s not Chief Executive Officer,” that’s a term that doesn’t quite compute in his mind, for him it’s something else entirely, “I’m the Chief Energy Officer.” He recognises that if his energy drops or isn’t managed properly then this resonates with the team and in turn affects the business.

Every successful business has an energised, enthusiastic team behind it. If the captain spearheading the charge can’t muster the excitement to engage in something, why should the foot soldiers follow? As a leader, you need to self-motivate, particularly when things aren’t going as planned.

The more energy you can bring to the table each day regardless of the obstacles, the better those around you will respond.

Being Transparent and Open

Honesty is the best policy when it comes to the functionality of a business. Okay, if you’re having a bad day, there’s no need to scream it from the rooftops that’s just over projecting, but be honest and open about it with the top leadership within your team.

In Ronsley’s case he prefers that some of his team understand where he stands particularly when things are at a low. Taking them aside and explaining “I’m seeing things through a weird lens guys, please be aware that’s what’s happening,” means, big decisions are less likely to be influenced by his negative outlook on that particular day.

Find a Team You Trust

Trust is such a huge concept when it comes to business. You need people around you that you know will want you and your business to succeed, “In business being able to trust your team to execute things the way it’s supposed to be executed is a huge advantage.”

Ronsley has seen that it does take time to build a solid team, but when you get that magical unicorn of a trusted team, they can then develop processes and increase a positive working culture.

When you become more open to possibilities and surround yourself with a good, trustworthy team that is willing to stand by your ideas you are setting yourself up for a more successful entrepreneurial journey.

Listen to my entire conversation with Greg Layton here.