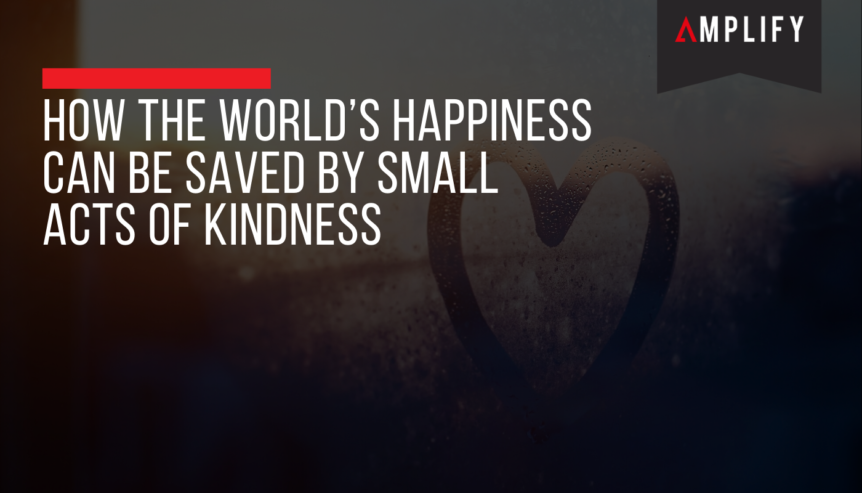 Does our happiness really matter? Just like its negative counterparts, positive emotions can play a significant role and help create emotional balance in our everyday life.

Positive emotions such as joy, love and hope all contribute towards helping us connect with others. They give us a higher capacity to contend with an ever-changing world.

However, right now, the world’s happiness reserves seem to be in decline.

A Gallup poll conducted in 2013 across 138 countries found that one in five people experienced anger (19%) and sadness (20%), more than one in four experienced some physical pain (27%), and one in three experienced increased stress (33%) and worry (34%) within 24 hours.

Okay, so there are many glaring factors for a reduction in global happiness. These include things like an increase in poverty, lack of job prospects, freedom, and of course, governmental corruption. But, the underlying opinion among psychologists is that it's our positive day-to-day actions that contribute the most to our overall ‘happiness health.'

We crave happiness. We crave connection. We crave unity.

Not just for ourselves, but the world as a whole. The adage of “Money doesn't make you happy,” certainly plays testament to that. Especially when you look at the stats.

It looks like the happiness crisis can't be solved by just throwing money at it. So now what?

Psychiatrist, executive consultant and founder of the #WMYST movement, Dr Mark Goulston, believes it's through connection and acts of kindness that will get us there.

As Aristotle said, “Happiness is the meaning and the purpose of life, the whole aim, and end of human existence.”

While this may feel like a heavy burden to carry, creating a positive network of happiness is easier than you think.

A study published in 2008 in the British Medical Journal showed that happy people make others around them happy too. This contagious phenomenon is known as the “Cascade Effect,” and it transfers between individuals and even up to three degrees of separation.

So, simply put, not only will your happiness make your friends happy, but also your friend's friends, and beyond!

So, surely the pursuit of happiness is almost a public duty and an incredibly generous act in and of itself.

The Health Benefits from Acts of Kindness

Ever felt all warm and fuzzy once you've done something nice for someone? That’s because when you give a little, you get a little- endorphins that is.

Endorphins are the brain's feel-good chemicals. They become triggered when you engage in a kind act. It’s endearingly known as a “helpers high,” which is also similar to a ‘runners high.'

Besides getting off on a dose of natural happiness, you also become engulfed by a serotonin boost- the chemical that gives a feeling of satisfaction and wellbeing.

Living with compassion and engaging in selfless acts has so many internal benefits. It reduces stress, anxiety and depression while also drastically increasing mental performance and bodily health. It can even improve your relationships. 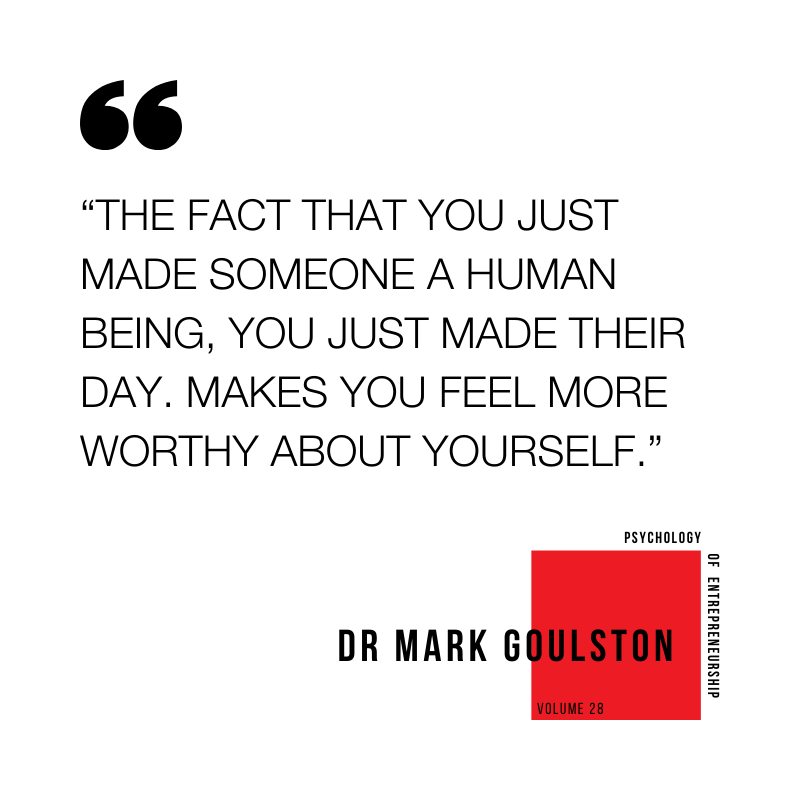 There's an increasing body of research that brings to light that the more socially and intimately connected we are, the happier we can feel.

This theory is rooted in the very core of our being.”This is what our brains were wired for: reaching out to and interacting with others,” explains neuroscientist Matthew Lieberman.

When it comes to initiating regular connections, Dr Goulston takes a sympathetic and humanising stance.

The speedy nature of modern-day interactions leaves very little room for genuine connection, so Mark likes to take the time to acknowledge people and connect. Say he's being served at a store, “They have a name tag, and I might say, after they ring me through, ‘Hey, Joan, thank you. My name is Mark,’” he says. “They go from being a function, an appliance, to being a person.”

“What happens is after you do it, you leave. No matter how important you are or how rich you are, the fact that you just made someone a human being, you just made their day, which makes you feel more worthy about yourself.”

What Made You Smile Today?

When was the last time someone asked you, “What made you smile today?” Probably never, right?

Dr Goulston is the founder of #WMYST, or the What Made You Smile Today movement.

Most of the interactions that occur throughout the average American's day can feel, well, a little transactional.

Getting a coffee, walking the dog, grabbing a bite to eat- the exchanges we may encounter are often brief and usually a bit flat or muted.

With almost half of American's feeling an overwhelming sense of ‘aloneness' surely, we should be making the most of these encounters?

Each time we smile, our brains throw a mini feel-good party that benefits the whole body. So as a ‘happiness experiment’ Dr Goulston suggests making someone smile- or at least think about it as often as you can.

Throughout your day, after you've been either served or assisted by someone, ask the person's name and explain that you have a question for them. Follow that up with “What made you smile today?” Then, watch and feel their response.

More often than not, you'll see them go from rigid and full of Cortisol (your body's primary stress hormone) to suddenly receiving a burst of Oxytocin (the so-called “love,” “bonding” or “cuddle” hormone) which then causes them to feel a surge of dopamine. As this happy upwelling unfolds in front of you, guess what happens next.

These feelings become reciprocated. These same chemical surges occur within you too. This is where a deeper, bond-forming connection is made.

“It's about making the world happier, one smile at a time. The world can use that,” Dr Goulston explains.

If you want to see this experiment in action, watch Dr Goulston challenge the Nowhere Men to take this experience to the streets.

So, get out of your ego, your comfort zone and self-centeredness, take the time to be kind and ask someone “What made you smile today?”

For more of the conversation with Dr. Mark Goulston, check out Volume 28 of Psychology of Entrepreneurship, hosted by Ronsley Vaz.