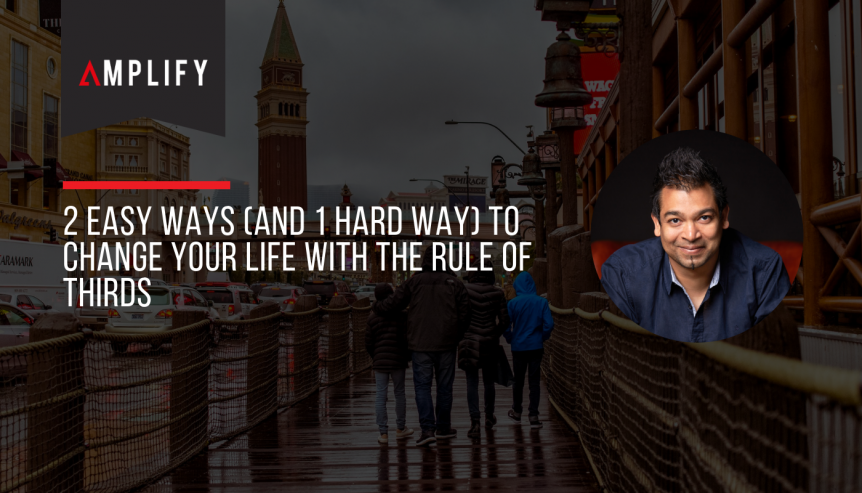 “Change your life”, everyone wants some version of this. Sean D’Souza thinks differently. Very differently. Maybe it’s because he’s an accountant, a creative, a cartoonist, a voracious reader, a teacher, and an early riser (4 a.m. to be exact).

With a life brimming with so many ideas and thoughts from all different worlds, Sean infamously vowed to take three months of vacation every year. He’s followed through on that promise, with one exception where he had a medical emergency. His three months of vacation pledge stems from Sean’s life philosophy of a rule of thirds. We’ll explore why Sean does take three months vacation, but he also shared two other less radical ways to change your life with the rule of thirds.

So technically if Sean truly were applying the rule of thirds to the calendar year, he would take four months of vacation each year, but he still commits to taking three months vacation. Why? What constitutes success for Sean is the recovery. Work is of the utmost importance to him, but the reason he takes extended breaks is because he learned business success is not just about freedom. It’s about energy. Energy is critical to Sean. When he is working he wants to be really recharged and happy about his work. He wants to be energised physically but also mentally.

Most entrepreneurs do not get nearly enough sleep as they should. But Sean argues getting 8 hours of sleep for every 16 hours of work is vital. Why? It comes back to the critical value of energy. If you are not properly rested and taking care of your body, your business will be the first to suffer from your lack of awareness and creativity deficit. Get your rest so you can be recharged each day to work hard.

One of the beautiful things about the rule of thirds is its simplicity. When fringe commitments become automated or out of mind, the more mental energy you have to focus on what is really important, whether that be your work or your personal goals. To keep your budget simple, you can allocate ⅓ of your income to the tax department, ⅓ to savings or investments and ⅓ to living expenses.

Well, there you have Sean’s rule of thirds philosophies applied to work/life balance and budget. Of course, for budding business people, taking three months of intentional vacation will likely be the hardest to achieve but who said being an entrepreneur would be easy! But give his other suggestions for sleeping and budgeting a go and simplify your life! When you follow simple philosophies like Sean’s rule of thirds, you will be able to focus on controlling the more crucial aspects of your life and business and be on the pathway to freedom.