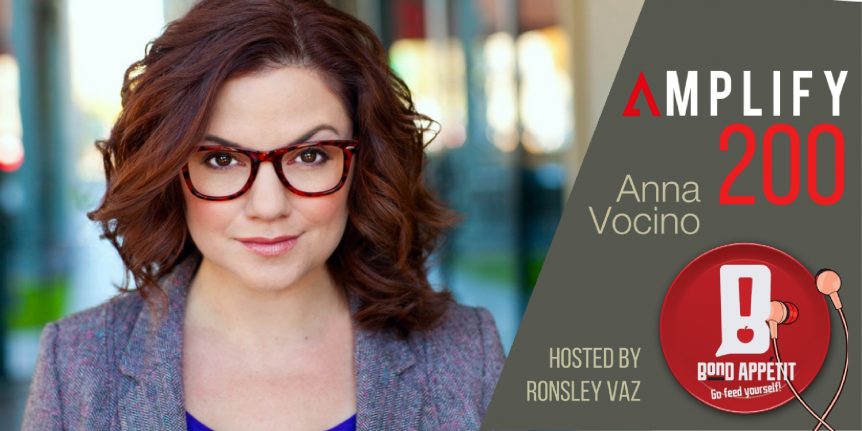 Anna Vocino makes her living as an actor. She like hiking, books, vodka and going to Italy, and she also loves her husband, daughter and dog. If you laugh at her jokes, you’ll probably be fast friends. If you make her laugh, you'll probably be best friends. Sometimes she's on TV, but mostly she's behind a microphone.

She was a series regular on the original semi-improvised show Free Radio on VH1/Comedy Central. Anna has also appeared in The Crazy Ones, It’s Always Sunny in Philadelphia, Children’s Hospital, Jimmy Kimmel Live! and The Lance Krall Show, a sketch comedy series for SpikeTV.

Anna is Celiac and Gluten Free since 2002, and began a blog to recreate gluten-free versions of comfort food favorites from her half-Italian, half-Southern-girl heritage. In 2012, she partnered with the inimitable Vinnie Tortorich to co-host and produce The Angriest Trainer Podcast, and her recipes these days are mostly free from sugars and grains. (The Vinnie term is NSNG – No Sugars No Grains.) Anna uses fresh ingredients whenever possible and keep things simple.

‘It's interesting when you don't partake in indulgences, whether it's food or alcohol, or whatever. It's really a short, tiny brief window where you feel like you're missing out on that birthday cake or having cocktails with everybody. And then it really kinda passes, and everyone else has a headache or feels bloated because they ate too much.'

‘I made a Cauliflower Pizza Crust and figuring out how to work with cauliflowers. Because you know it's a big thing, at least in the states now.'

‘Food is very specific. In fact, it's so specific because I'm used to just throwing things together, then I have to remake things several times to make sure I have my measurements right, and to make sure we're all in the same page.'

‘I like the way I roast a chicken. It's the best roasted chicken. I call it the “Easiest Roasted Chicken”. I set the chicken on a bed of onions, and I do it on a smaller thing because it's hard to get juices flowing sometimes with the chicken. If you do it on a smaller pan, they won't evaporate as much, plus the onions are gonna get the juices there so it's easier to base it.'

‘I love the Pittsburgh Turkey Chili. I've been making that at least every other week since I got married. Which is 18 years now.'

Where to find Anna Vocino